Rangeland Intern Samantha had quite an exciting week at Ladder ranch last week. She got to try to something new, while also tracking down run away cows! Here is what she had to say:

We ran into a lot of challenges this week! The root of our issues came from the cows that we put into the buck camp pasture. Almost every day this week, Nikki and I were putting cows back into buck camp because they had gotten out somewhere along the fence. Some days we found ourselves putting the cows back in TWICE! Each day we found a new hole in the fence that we had to fix. There was one spot we had to fix 3 times, where we ran all new barbed wire because the cows kept busting through the first old wire. We’re hoping to not run into any more cows being out this upcoming week!

One day, when we weren’t putting cows back into buck camp, Chad, Nikki and I went up to the Colorado forest where we moved the group of cows in Big Red Park to Silver City. The cows moved fairly well! When we got to Silver City, there was a mother cow and a calf that needed to be doctored. While we were waiting for Chad to get back with the pickup, Nikki had me practicing heeling so I could help her rope the cow while Chad gave the cows medicine. Nikki had me roping since Chad didn’t bring a horse that he could rope off of! I was okay with this because I got the opportunity to rope and caught after my 3rd loop! WOO! This was the first time I roped off of a horse!

Another day this week, Nikki and I trailed 3 heifers and 2 bulls from the house to upper big gulch where the big herd of heifers is! This little group had gotten in with the neighbor’s cattle! They moved fairly smoothly up to the pasture but we ran into a couple of issues when one of the bulls wanted to peel off and be with the milk cows that were in the first pasture that we have to go through to get to Upper Big Gulch! 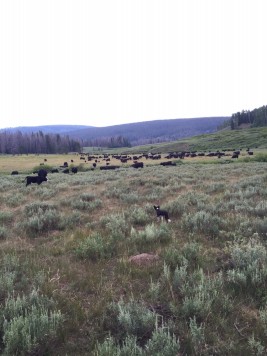