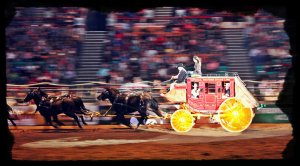 From our WSGA friend and contributor, Roy Barnes

Denver, Colo. Once again, the Wyoming Stock Growers Association (WSGA) participated in the Wyoming Day Festivities of the National Western Stock Show Saturday, Jan. 25, by taking down a group of Wyomingites from Cheyenne for a day trip so they could enjoy the sights and sounds of the event, the 108th in total that showcases the best of rodeo cowboys, ranchers, plus other livestock and agricultural producers over a 16-day period.

I was invited by the WSGA to cover this trip, but my observations in this article were not vetted by the organization.

Some 40 people took part in the Wyoming Day festivities that the WSGA organized, including those who drove themselves to the stock show, which helped to get the grand total stock show attendance to 640,022, according to a Jan. 26 National Western Stock Show press release

The crowd included Myra Hannah, whose “centennial ranch” (a ranch that’s been in the same family for 100 years-plus) is some 30 miles from Wheatland, Wyo. She has traveled down to the stock show via the bus ride for several years with her daughter, though she does have some fond memories of a time when the trip was made via train from Cheyenne to Denver and back, saying it “was a little slower, but very interesting,” especially when she got to sit in the observation car to take in the sights during the late 1960s/early 1970s. But she keeps coming back because, “I…enjoy it. It’s a handy way to go and interesting to be with the group, for I know some of the people” who take the annual bus trips.

Scott Sims, who has a cattle ranch in Albany County, Wyo., came down with his wife and daughter for the first time by bus. He commented that he doesn’t get a lot of leisure time due to his duties at his ranch, but appreciates the opportunities “to get away form the ranch [to have] a little vacation time, family time.” Furthermore, he like to see the numerous exhibitor booths and stands that feature the latest in farm and ranching equipment “because you learn what the new technologies are, the new exhibits to check out to bring back home to help make changes in the operation.” He was hoping to check out the draft horse show, an event which actually took place in the early afternoon.

There were plenty of activities going on throughout the day both inside and outside, where the weather was very sunny and mild. One could pay a fee to pose with a Texas Longhorn, while another booth was charging to pose with a bald eagle or an owl, which drew a steady of crowd of onlookers taking pictures with their own cameras. Even longer waits could be found (10-15 minutes) on the second floor of the Exhibition Hall where the petting zoo was located. Here, children and adults got the chance to not only pet, but feed the sheep, lambs, goats, kids, ducks, geese, and pigs (the latter wouldn’t look at anyone, but kept their snouts on the ground to forage for food). One little lamb was laying down by itself along a wall of the petting zoo, not trying to freeload off of the humans like all the other friendly animals were. 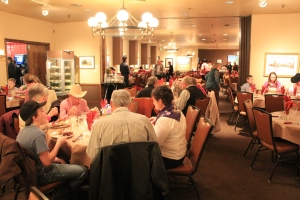 After lunch, the participants had time to take in more of the goings-on of the stock show such as a bison auction and the draft horse show. Colorado State University once again displayed a large farm exhibit to educate the stock show goers about the importance of agriculture in the daily lives of everyone. This included demonstrations and talks by beekeepers, and hands-on exhibits where people could look at and handle various kinds of grains, including oats, millet, and barley.

The rodeo was deemed the equivalent of “The AFC and NFC Championship Games,” per the public address announcer, who also spoke of God and His role in the lives of cowboys and cowgirls, much to the approval of the 8,000-plus in attendance, who also heard the announcer espouse the appreciation for the state of Wyoming’s role in agriculture. Gov. Mead and officials of the WSGA took part in the 6-Horse Stage Coach Hitch in the arena between the team roping and saddle bronc riding events. The top finishers of the events such as bull riding, tie down roping, barrel racing, etc., were set to compete in the finals on Sunday.

Before another feast or spare ribs, brisket, baked chicken, and smoked sausage with all the trimmings at Nordy’s BBQ in Loveland, Colo. Cynthia Cloud and Mark Gordon, two high-ranking Wyoming State Government officials, spoke about their tine at the stock show. Cloud, the Wyoming State Auditor, said that the trip was her first to the National Western events, and added, “I enjoyed the draft show. I was amazed how the draft horses were, [that is], how the participants in the competition took such pride in their horses, buggies, and carts. What really surprised me is that there was something for everybody there.”

And Gordon, the Wyoming State Treasurer, while a past attendee of the stock show many times, was also on his first trip by bus. “I really loved the saddle bronc. I used to calf rope, so I liked it, though it’s called the tie-down now,” he said. Gordon described the Wyoming Day group as one full of “good camaraderie – good folks to go with.”