EDITOR’S NOTE: On a ranch, everyone in the family has a job to do according to their skills and abilities. On her blog, RealRancher Heather Hamilton shares a job her sister, Holly, is in charge of as part of their hay transportation operation.

Among Holly’s jobs around here are rolling straps as often as possible when the guys bring a load of hay to our place. She enjoys the task, and generally is happy to go along with about anything trucking related. Here she is headed down the stack corral with my brother this evening.

Here she is a few days ago, with another load. As dad or Kyle unhooks the straps on one side, Holly begins pulling them out on the opposite side. 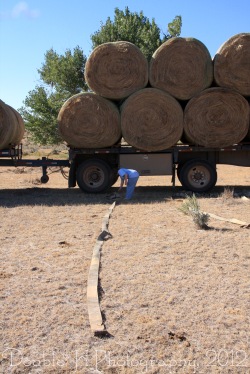