Intern Andrew has learned much this summer in regards to all things ranching. This past week he focused broadening his knowledge of invasive species and pest control.

Haying season has come to a close on the E bar U and its now time to take cattle to the mountain so they can spend the rest of the summer in their grazing allotments. This week we had a focus on finishing up haying season and preparing for next weeks move to the mountain. Vaccinations boosters will be given to the calves in the next couple of days and we will leave on Thursday and will be trailing cattle until Sunday. One interesting thing we did this week was collect and redistribute flea beetles. 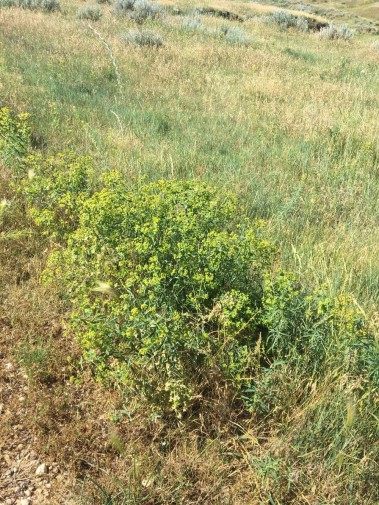 The two Flea Beetle species uses to control leafy spurge are Aphthona nigriscutis and Aphthona lacertosa. Both these insects graze upon leafy spurge, which is an invasive plant that has become a major problem within the western states. The E bar U has been using this type of spurge control for a number of years and it has truly made a difference in the fight to control spurge. Draws and lowlands that were almost 100 percent covered in spurge are now almost completely free of spurge. This has allowed the grass to grow back and has increased forage production throughout the ranch. Using the flea beetles is not a quick fix. For the bugs to make a difference they must be properly collected and moved to new sites as well as given enough time to graze down the spurge.