Jedidiah Hewlett has been busy with swathing hay, preparing for a shipment of goats, and welcoming new members to the Perry Cattle Company this past week.

This week we welcomed the Perry’s niece (and family) to the ranch. Jeff and Amie Metzger have two boys, one is 5 years old and the other 6 months. Jeff will be working full time for the Perry Ranch.

We began to prepare for the arrival of 75 head of goat nannies that we will use to control the leafy spurge epidemic that has inundated the lease pasture where we graze the cows. The goats are coming from Oklahoma at about $100/head. The Perrys are hoping to turn these goats around after fattening them for about 30-45 days, and make some profit on them. There is also the potential that the Sheridan County Weed & Pest would pay the Perry Cattle Co. for helping reduce this very invasive species of weed. This week we put up another strand of electric fence to help contain the goats in the pastures. We also put wire cattle panels inside the pipe-panel corral to hold the goats at night. Nothing like this has been done in around here, so hopefully everything goes well!

We have continued to make our way through the first cutting of hay. We hauled and stacked all the bales off one meadow, and were pleased to find that it produced 2.5 tons/acre. We finished swathing another 69-acre meadow and got some of it baled as well. Despite a few equipment breakdowns, we have kept moving forward, and are happy to see such great yields.

Other than that, we have been doing odd jobs, from machinery maintenance to cleaning out the tack room (it desperately needed organization!). Jeff also gave me a lesson on how to trim horse hooves, which I enjoyed. The little bit of irrigation has been going very well, and has very much helped by the 2.5” of rain we were blessed to have. 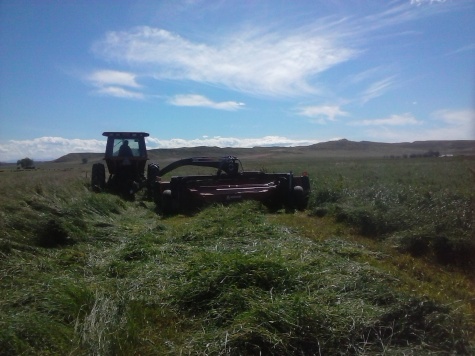