Here is Jackalyn’s update on her first week at Brokaw Ranch!

Sunday the 18th I settled into the Brokaw Ranch and ate a wonderful meal with Ralph Brokaw, his kids Lindy and Shade, as well as a few family friends. Each day during the week started and finished with feeding the two steers that they have and giving them water as well as checking for any sick calves and any heifers that may need help with birthing their babies. Monday the 19th I met another part time ranch helper Dawn who showed me around the ranch. I was able to drive a huge John Deer Tractor and Dawn and I picked up branches from a previous storm where they received 30 inches of snow. 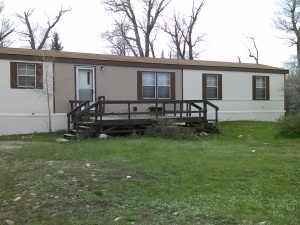 The house Jackalyn is Staying in 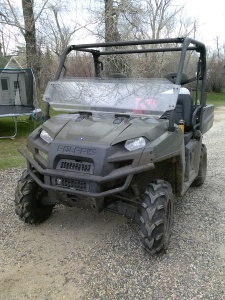 The Ranger used to get around the ranch

Tuesday the 20th a group of 6 people went to Saratoga to brand 130 calves for Mr. Heizer (my boss’s boss). This is something I had never done before. We set up a shoot, and had one person push the calves through to the table. Once in the table I had to push them by the tail so their head went into the hole at the end. Another person worked the levers and squeezed their head into the shoot and flipped the table horizontal. From there I was able to put the rope on the calves left foot and tighten it so they were not able to kick. We had a few people give shots/disinfect/dehorn while another person castrated and branded. This was a long day and we came back to do this on Thursday the 22nd where I was able to push calves into the shoot and round them up instead.

Wednesday the 21st I helped fix one of the tractors that wouldn’t start, built a pig pen, put up an electric fence, and fed some horses.

Friday the 23rd I woke up early to meet a biologist that came out to do an experiment with birds. His name was Mr. Frost, him and I went out to a site near a pond where we listened to what birds we could hear and which ones we saw fly over the area. We did this for about 50 minutes and documented the names and whether it was because they were migrating or mating. After getting back I went out to drag parts of the pasture with a tractor followed by pipes attached with chains. This breaks up the cow poop and fertilizes the ground at the same time. Later in the afternoon it started to rain. We noticed a heifer having trouble giving birth and pushed her into the barn to help. Her calve was stuck and we hooked chains up to its front legs and tried pulling it out. This took about 20 min. (half way out) his lower part was stuck and he couldn’t breathe. By the time we got him out, my boss Ralph tried to do mouth to mouth with no luck and we lost him. This ended my week. 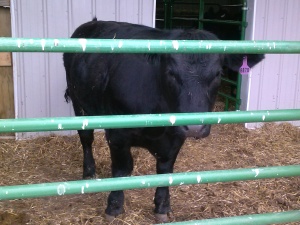 One of the steers Jackalyn feeds